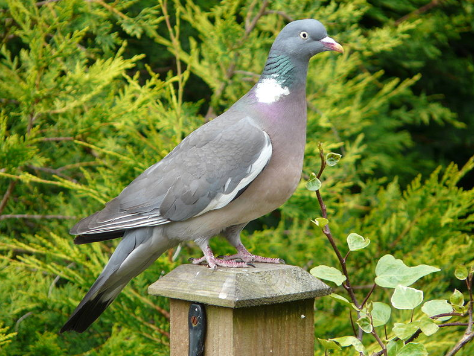 This week’s edition focuses on two things at the allotment this week. The first being leaves, the second is the ongoing war between the pigeons and old CD’s; a conflict that has apparently engulfed most of the country.

After the previous week’s Halloween exploits, everyone’s attention had turned yet again back to the allotment. When they turned up between the hours of one o’clock and three o’clock they were shocked to find that some leaves had fallen off some trees and everybody lost their minds.

This was met with the unveiling of these green claw like hand devices that are made for gathering leaves and putting them in piles. I find these things a highly dubious invention, obviously these green claw like hand devices came about before the discovery of leaf blowers or blustery weather. The group of seven magnificent volunteers were split into two groups. The first group, the one I was part of, were assigned to “tidy up the leaves outside”. This again, I found quite dubious as I don’t know anybody who has tidied up the leaves and never had to do it ever again. I would like to know what kind of damaging effect a leaf could have on the environment or the economy if left on the ground. One could only imagine what kind of disorder would break out among the masses if nobody was about to put leaves into piles. This has in turn become the subject of my latest social experiment, which, after my last attempt at experimentation seems quite whimsical. But then again, if your last great scientific exploit was to see how long a hedgehog would last on a child’s roundabout when spinning at terminal velocity, I guess that is inevitable. This in turn leads me to introduce the ground breaking new feature...

It’s time for you to leaf.

The main objective of this feature is to keep a record of what leaves in your community are doing throughout the winter months.

This week, with all this rain, everything has got considerably damper. It could be argued that the leaves have become too damp and have discoloured to a darker shade of brown. However, a spokesperson for the leaf community said that

“This happens every year, I don’t know what all the fuss is about”.

With all the excitement around the first new thing to happen on this blog for a few years, I feel compelled to introduce yet another new feature. That however will have to wait until next week because I’ve run out of ideas.

Paranoia is something I believe we all have a little bit of, for example every day I look at the shed door and think to myself “That’s going to fall off soon”.

This is because one of the hinges is hanging off and judging by the quality of metal products I buy, the other one hasn’t got left. It would appear there are two different groups of people that deal with a situation like this. The first group is made up of people that have fears, worries or doubts so they do something about it, however bad there discussion might be. For the sake of an upcoming joke I will call them “Knives”. Then we have the second group made up of people like me, who look at something and think “Oh dear I hope someone does something about that”. For the sake of the same joke I will call these people “Forks”. There are pros and cons to being either one of these, most of the time these groups stick together and talk about the other group. This means that hardly anything ever gets done, especially when a problem needs to be solved. However sometimes these two groups, “Knives” and “Forks”, get together and make a meal of the whole thing.

So when someone at the allotment told me that we need to sort out this pigeon problem I said “Leave me and the pigeons alone!”

Tune in next week for the return of the popular feature Ooh look at the size of them! As well as some other things that may or may not happen.